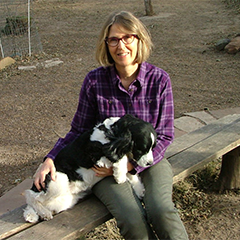 My first canine buddy as an adult was my heart dog, Chamois, who was a fun-loving yellow Lab. As a new puppy parent, I felt uncertain with how to proceed teaching Chamois about controlling some of her exuberance when it was appropriate. We started out at puppy obedience classes that had been recommended. However, Chamois eventually became stressed going to those classes due to the training methods. Eventually I found classes by 2 instructors who taught using only positive and force-free methods. Chamois blossomed with this tutelage! Since she was an energetic and inquisitive girl, I also tried to keep her stimulated by signing us up for agility and tracking classes. We learned so much together! Chamois passed away in 2014, and the following year I took a week-long Canine Training & Behavior course in Maryland, which is taught by the training editor of Whole Dog Journal. And most recently I had the pleasure of spending a weekend at a T-Touch workshop in Iowa City; T-Touch is a gentle method of training and bonding with animals.

Although I’m a native Iowan, Chamois was born and spent the first 8 years of her life in western Montana. Since she had lots of energy to burn, we frequently hiked in the foothills and mountains and played rousing games of fetch. Here at Pooch Palace, I have also enjoyed being outside with our guest dogs and group “hiking” our loops and/or playing fetch with them in our fenced “back 40!” It’s been a joy learning more about each dog’s unique personality, interacting with them while they are in their rooms, and just spending some one-on-one time giving a rump scratch or having a gentle game of tug. I love being able to further our friendships when we have return canine guests, but I also look forward to getting to know and spend time with our new dog visitors.